Some footwear brands have rich histories that buyers overlook. That’s certainly the case with Rieker shoes. With a history reaching back to the latter part of the 19th century, this brand is known for high-quality, innovative design, and a commitment to offering customers styles they can put to good use. Here are some of the highlights of the company’s history and why it will continue to be the brand of choice for many consumers. 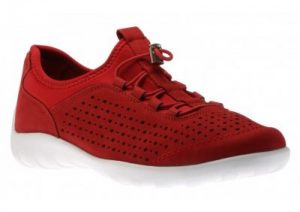 The origins of Rieker Shoes are rooted in the city of Tuttlingen, located in the southern part of Germany. It was there that Heinrich Rieker and his business partner Carl Seltz set up an operation to create footwear for local well-to-do patrons. Initially, the name of the operation was Rieker & Seltz, so named after the two owners. Beginning in 1874, the company soon became a favorite among the more affluent citizens in the northern part of Italy.

The reputation of Rieker shoes for men began to spread quickly. At first, their fame was situated in the Black Forest Region of Germany. As their customers traveled, they spread the word about this little gem that was producing some of the most exquisite footwear to be found. That’s what led to Rieker shoes for men becoming so popular in northern Italy. Between the popularity close to home and the growing market among the more prosperous families in Italy, it was only a matter of time before Rieker boots along with Rieker shoes captured more attention throughout the continent.

While Riekers began with a few basic designs that were considered as tasteful as they were practical, the demand among the upper classes led to the creation of additional designs. This set the trend that would continue throughout the remainder of the company’s history. Along with Rieker shoes and Rieker boots for mean, it was only a matter of time before the product line would include Rieker shoes for women. By the turn of the century, just about everyone who was anyone recognized the name of Rieker and knew it stood for quality as well as superior styling.

Soon after the business celebrated its first quarter-century of operation, changes began to take place. In 1901, Seltz decided to leave the company. With his departure, the business also got a new name of Rieker. For the next few years, the business continued to attract more customers and slowly hired more employees. At all times, the company continued to retain strict control over the materials used for their shoes. That policy is still in effect today.

During this era, Riekers resisted to follow the pattern established by the competition. Expansion was slow and intentional rather than being driven by a desire to make a quick profit in a growing market. While there were those who ridiculed the owners for choosing to develop the company as a relatively slow pace, the employees that were producing the Rieker shoes for men and would eventually produce Rieker shoes for women had the peace of mind that comes from knowing their jobs were safe. Unlike many competitors who overextended themselves and eventually went out of business, Rieker shoes and Rieker boots continued to be produced at a consistent rate. This helped ensure the company was not impacted by the same financial issues that led to the demise of several competitors.

This did not mean that Riekers din’t make any type of internal changes. With the demand for Rieker shoes for men growing and the potential of eventually tapping into a new market with a line of Rieker shoes for women, the owner and the management team were always looking for ways to enhance the production process. At the same time, the powers that be never lost sight of what had served the company well during its first quarter-century of operation: a firm commitment to offering quality footwear made using nothing but quality materials.

Even as Riekers continued to offer footwear designs that customers had come to expect, they were experimenting with other designs behind the scenes. The experimentation included alternative designs for toe boxes, heel heights and shapes, and even some designs for Rieker shoes for mean that included Rieker shoes and Rieker boots that included different combinations of materials.

Those that showed promise in terms of meeting or exceeding the quality standards set by the business eventually found their way to consumers. While it would still be some time before the line of Rieker shoes for women would come into reality and begin to rival the popularity of the line offered for men, some of these early research and development projects helped form the basis for those later designs offered to women.

The next major change occurred in 1905. Heinrich Rieker passed away that year. While there was some initial concern about who would operate the business, it was soon apparent that his three sons – Karl, Ernst, and Heinrich – would take over the leadership. The three sons chose to leave much of the structure their father created in place, while also preparing for opportunities to expand the company in the years to come. Those changes included adding lines of shoes for women alongside the traditional Rieker shoes for men’s needs.

By the end of the first World War, the brand Rieker Shoes was well known in many parts of Europe as well as their established stronghold in Germany and Italy. While World War II slowed production for a time, the company soon recovered and continued to expand. Part of the expansion had to do with developing new approaches to designing footwear for a wider range of activities.

While there was no changes in standards of quality, the owners sought to make use of emerging technology to ensure that all the Rieker shoes and Rieker boots they offered could be made faster and meet the growing demand.  This still meant retaining the high level of quality control that had built the company’s reputation over the last several decades. It also meant adapting the processes for quality to control so they would ensure nothing left the factory that was not in keeping with those high standards.

This approach proved successful. Over the next four decades, the reputation of Rieker shoes for men and eventually Rieker shoes for women remained consistently favourable. Fresh designs found their place alongside more traditional ones, making it possible to appeal to a wider audience. As the decade of the 1960s came to a close, it was hard to find any person who insisted on only the best footwear who had never heard of Rieker boots or had owned at least one pair of Riekers footwear.

By 1969, it was obvious that the company was growing so much that a new organizational approach was needed. The decision was made to split the operation into three divisions. One would focus on the core shoe styles, while a different one would produce shoes for children. A third division devoted attention to sporting footwear, including ski boots.  Over the next several years, Rieker Shoes outlets began to appear in choice locations across Europe, making it even easier for customers to discover the brand.

For the remainder of the 20th century, Riekers would continue to reach out and build a reputation in more nations. This meant building additional production facilities as well as establishing outlets for Rieker shoes and Rieker boots in select locations. The actual number of outlets owned or franchised by the company remained small in comparison to competing companies. Just as slow controlled growth had served the company well in decades past, it continued to help the business incrementally expand without running the risk of overextending its resources.

Part of the growth came from reaching out to establish a presence on both sides of the Atlantic. The first efforts to expand into North America came in 1955, with a modest introduction into the footwear market in Canada. From the 1970s on, that effort became more aggressive. This eventually led to the establishment of a corporate satellite office and a distribution centre in Concord, Ontario. From there, it was possible to more efficiently meet the need for Rieker shoes for men and Rieker shoes for women that were created with a Canadian audience in mind.

The development of online commerce in the 1990s and beyond provided a new way for Riekers to establish connections with consumers in a wider range of nations. People who may have only heard of Rieker shoes or Rieker boots because they had traveled to Europe or Canada now had the ability to order from properly licensed online retailers. This continues to be one of the most lucrative revenue sources for the business.

North America has not been the only part of the globe to learn the name of Riekers over the last few decades. The company expanded into new markets in the Orient, the Middle East, and also to parts of Africa. There are also South American markets that now have access to Rieker shoes of all types. No matter where you happen to live, there’s a way to find the Rieker shoes for women or Rieker shoes for men that you want. Whatever occasion you have in mind, there’s likely to be a pair of Rieker shoes that are ideal.

Today, Rieker employs over 20,000 people in three design units, 16 wholesale units, and continues to operate their own production units in North Africa, Vietnam, and parts of Eastern Europe. A network of over 9,000 retailers offer the shoes for sale, with Rieker Antistress designs remaining one of the most popular lines.

From outdoor activities like hunting or camping to casual wear, the product line offered by Riekers has never been better. Rieker shoes for working out are popular while Rieker boots for farming and ranching remain a staple of the company’s line. The diversity of the line for Rieker shoes for mean as well as Rieker shoes for women ensure there is always something worth considering.

If you’ve never tried a pair of Rieker shoes, today is the right time to change that. Look online for a Rieker Shoes clearance, or visit a reputable online retailer and check out Rieker Shoes for sale. You won’t be disappointed.